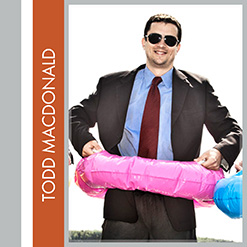 After 10 years of brand management in the international footwear industry, Todd shifted his career in 2001 to become an entrepreneur. Pivoting to the Oil and Gas sector, he helped a large public company start up a highly-profitable commodities trading division before founding his own trading firm, Energy Atlantica. Now in its 14th year, Energy Atlantica continues to thrive and has completed almost $1 billion in transactions. Todd is active on the trading floor but dedicates much of his time to strategic development, culture, and team leadership.

Todd is also a founder of GIVETOLIVE, a non-profit organization challenging people to live happy and healthy lives through generosity, fitness, and achievement of the extraordinary. Established within the walls of Energy Atlantica, and operated by its employees, GIVETOLIVE has inspired thousands of people to participate in their slightly crazy, but always epic, expeditions – and in doing so has raised over $3 million for charity. Todd has completed 15 GIVETOLIVE events, including swimming to PEI 3 times, running a snowshoe marathon, and cycling across North America, the Alps, and Iceland. He attributes a large portion of his professional success and personal happiness to those that make GIVETOLIVE happen.

Todd has a business degree from the University of South Carolina and an MBA from Johns Hopkins University. He lives in Halifax, NS with his wife and GIVETOLIVE co-founder, Ashley, and VP of Gas Production, Pickles the Goldendoodle.